*all stats are 5v5 unless otherwise indicated.

Over the last five NHL seasons, no NHL team has won a Stanley Cup after finishing in the bottom ten teams in the league in terms of save percentage.

In fact, only aging Martin Brodeur – to put it lightly – and the 2011-2012 New Jersey Devils have made the Stanley Cup Final after finishing the regular season in the bottom ten teams in save percentage.

That isn’t a promising sign for a few teams who expect to contend for a Stanley Cup this spring. The high-flying Dallas Stars, the puck hog Anaheim Ducks and the heating up San Jose Sharks all find themselves in the bottom tier in that area.

The most concerned team of the three should be the Dallas Stars, who find themselves having the second worst save percentage at 5v5 in the entire NHL. They lead only the lowly Calgary Flames in this department while the teams directly ahead of the Stars are the Edmonton Oilers and the Carolina Hurricanes. This isn’t exactly a group you want to be mentioned with in any facet if you’re hoping to make a Cup run.

Only one team has made it out of the first round of the playoffs in the last five seasons after finishing in the bottom three teams in the league in save percentage. That team was the 2010-2011 Tampa Bay Lightning after picking up Dwayne Roloson from the Islanders earlier in the year. They Lightning ultimately lost in the Eastern Conference Final to the eventual Stanley Cup champion Boston Bruins. “Rolly the goalie” played one more season with the Lightning, posting an .886 and never playing professional hockey again.

Of the 51 teams to finish in the bottom ten in save percentage in the last five seasons – a three way tie caused the extra team in there – only 15 have made the playoffs. That means that over 70% of those teams don’t make the playoffs, let alone make a run at a Stanley Cup. On average, three of these ten teams make the playoffs every season. This year the three teams have already been decided with the Sharks, Ducks and Stars already clinching spots and the other seven teams mathematically eliminated from contention (aside from the Hurricanes, but for all intents and purposes they’re eliminated.)

Before I began researching this, I thought the Ducks had the best chance of taking out the L.A. Kings in a seven game playoff series. While I still think this would be the best series since the Blackhawks/Kings Western Conference Finals in the 2014 playoffs, I would now expect the Kings to win. The Ducks currently sit in 21st in league save percentage while the Kings are 10th. Combine that with Quick’s experience over John Gibson and you have a clear advantage for the Kings in the goaltending department, but you already knew that. Gibson has taken over for the Ducks, but he hasn’t exactly been dominant either with an even strength save percentage of .919. Compare that to Quick’s .927 and the Kings have a significant advantage. Gibson’s .919 mark comes in around the area of Jimmy Howard and Scott Darling, while Quick’s .927  is sandwiched between Jake Allen and Tuukka Rask.

The San Jose Sharks, like the Stars, don’t have a definitive number one goaltender but I trust their duo of Martin Jones/James Reimer much more than the Stars duo of Kari Lehtonen/Antti Niemi. In saying that, I don’t see either of those teams making it out of the second round.

Ironically, if the playoffs started today the Ducks and Sharks would face off in a first round match-up. This would be a very entertaining series to watch and there could be a goaltending carousel. Both teams would have two capable goaltenders dressed each. Gibson/Frederik Andersen for the Ducks and Reimer/Jones for the Sharks. We could potentially see four different goaltenders start multiple games in this hypothetical series.

*For this chart, the goal is for both bars to be low. The Stars goaltending just isn’t going to cut it. 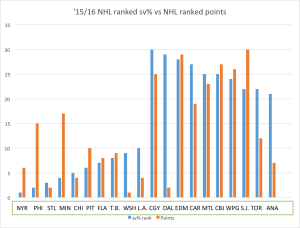 Hockey analytics are for anyone who wants them.

First things first: you can enjoy a hockey game with or without analytics. Knowing your team is getting horrendously outshot does not mean you can’t enjoy a gorgeous breakaway goal, or no-look pass, or a clean hip-check along the boards.

Analytics answer questions. They don’t necessarily tell us who will win, but they help us understand why a team might. If the top scorer in the league will get that many goals next season. Who ought to stay on a roster and who ought to go. Whether or not you should pick that guy up in your keeper league. It’s a place to begin.  END_OF_DOCUMENT_TOKEN_TO_BE_REPLACED

Cooking is a passion of mine. For a long while, it was also an occupation. I started the way most do in that world: washing dishes for minimum wage at the ripe age of 15. My CV was bare for a complete lack of experience, save for vague promises of being a quick learner and such. As it happens, I would live up to that claim. I had climbed and, at times, stumbled through the ranks to earn a job at one of Canada’s foremost gastronomic destinations before I had finally had enough. Despite my divorce from cooking as a profession, it remains part of my life and story. It’s common for people to discern connections between various elements important to their lives, and I’m no different. Lately, I’ve become increasingly aware of such parallels between cooking and hockey. END_OF_DOCUMENT_TOKEN_TO_BE_REPLACED

Have a question about if Corsica does something, where to find it, or how exactly it’s done? Check below.

Right around the time I began constructing my scraper, An idea struck me while watching a game on the league’s streaming service (formerly known as) GameCenter Live. The GameCenter video player includes markers indicating the time at which certain events of interest occurred and allows users to jump to these highlights. It had not occurred to me until then that this information must reside somewhere in the NHL.com site that can potentially be accessed. This data would eventually be collected by my scraper and stored in the Corsica database.

Highlights are comprised of goals and shots on goal. All goals are highlights, but only some shots are labelled as such. Unfortunately, I don’t know what criteria are considered in labelling these events. I imagine the process is very subjective and likely influenced in significant fashion by bias. The only thing we can ascertain is that somebody decided these events were worth categorizing as “highlights.” I haven’t yet delved into this information in great detail but I have pondered its potential uses. I’m particularly curious to know whether these data can be employed to introduce a human element to generalized scoring chance definitions. More specifically, can they indicate quality shots that are taken outside of the traditional high-danger areas? That’s a question for another day. In the meantime, we can answer a simpler and substantially more fun question. Who is the NHL’s Human Highlight Reel? END_OF_DOCUMENT_TOKEN_TO_BE_REPLACED

Shot quality is a polarizing issue within the hockey stats community. Its relevance and value has been examined in various ways by many people and debated endlessly. To avoid a history lesson, I’ll keep the introduction to this topic brief, but I recommend conducting some additional research to anybody interested in learning more. It’s foremost important to understand nobody (worth listening to) has or will argue that shot quality does not exist. That some shots are better1Let’s get this out of the way early. “Better” in this article will refer to a greater probability of becoming a goal. than others is a core tenet of hockey and indeed any such sport. Questions like “What makes a shot better?” or “Can players have a sustainable influence on shot quality?” are much more interesting questions. As is often the case with such things, answering these questions can prove tricky.