Shot quality is a polarizing issue within the hockey stats community. Its relevance and value has been examined in various ways by many people and debated endlessly. To avoid a history lesson, I’ll keep the introduction to this topic brief, but I recommend conducting some additional research to anybody interested in learning more. It’s foremost important to understand nobody (worth listening to) has or will argue that shot quality does not exist. That some shots are better1Let’s get this out of the way early. “Better” in this article will refer to a greater probability of becoming a goal. than others is a core tenet of hockey and indeed any such sport. Questions like “What makes a shot better?” or “Can players have a sustainable influence on shot quality?” are much more interesting questions. As is often the case with such things, answering these questions can prove tricky.

The crux of people’s skepticism towards the relevance of shot quality in hockey analysis is the variance in this measure that has been observed at both the team and player levels. Hockey is fraught with randomness and this imposes limitations on one’s ability to predict future outcomes or performance.2People have used this fact to disparage the usefulness of statistical methods and analysis in hockey. To them, I simply suggest to look to physics for an example of how people have managed awesome findings amidst chaotic environments. Despite this, we expect some semblance of persistent influence on certain aspects we assume to be driven by talent. When this persistence or repeatability is absent, I believe it’s fair to question a metric’s worth as an evaluative tool.

Mine is a shot quality model. xG stats are by-products of assigning goal expectancy to shots. In my mind, this ability to assess shot quality is most important, though supplying information with which to devise better evaluative metrics is a welcome benefit. The model is similar in nature to that of @DTMAboutHeart,3I encourage you to read about DTM’s xG model here if you haven’t already. with some important distinctions. The most important difference is his inclusion of regressed shooting talent. I chose to exclude shooter talent not because it isn’t an important factor, but rather because I fear players may unfairly benefit or suffer from their linemates’ aptitude. Here’s what my model does account for:

Each of the six shot types6They are: Wrist shot, slap shot, backhand, snap shot, deflection, wrap-around. provided by the NHL forms its own category, and these are further subsetted by rebound and non-rebound. Only unblocked shots are used due to the unfortunate fact blocked shot coordinates are unavailable.7For clarity’s sake, coordinates for these events exist but represent the location of the blocking player rather than the shooter. These twelve shot sub-types are regressed independently according to the remaining variables. The rationale here is that each shot subset should respond to the variables differently. Namely, distance and angle do not influence slap shot quality in the same manner as they do, say, deflections. In addition, the relationship between goal expectancy and distance or angle are not assumed to be linear. That is to say, the model is not bound by the idea that shot quality changes at a constant rate along the scales of distance and angle. I found these modifications improved the model’s ability to assess goal expectancy.8Added flexibility in regression models can often have drawbacks, such as overfitting. To avoid this, I tested my model out of sample on a sizeable set of shots not included in the original training data.

EP: Additional details for the mathematically-inclined follow, which you may feel free to scroll past.

The important question at hand is: How well does this model assess shot quality? We may evaluate a number of things to answer this question. Firstly, are “better shots”10In case it was unclear, here I refer to shots deemed by the model to be of higher quality. truly better shots? 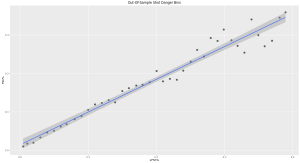 The mean expected Fenwick shooting percentage of shot danger bins does a good job of approximating the observed percentage. It should be reiterated that these are out-of-sample shots. The model has never seen these events because they are excluded from the training data. Additionally, we can see how closely players’ projected goal totals according to the model match actual goals scored: 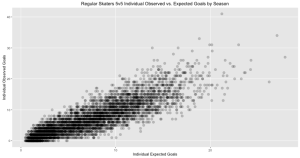 The R^2 value obtained from the above relationship (0.750) significantly exceeds that of goals scored versus unblocked shots (0.586) and even shots on goal (0.619) despite the disadvantage of ignoring whether shots missed the target. Isolating shot quality from quantity by examining the relationship between expected and observed Fenwick shooting percentage in regular skaters yields an R^2 value of 0.130 for forwards and 0.104 for defenders. I believe these are reasonable values considering what factors are not included in the model. Particularly shooter and goaltender talent, as well as pure luck which we know is pervasive in what we’re attempting to measure.

The logical progression from having developed a method with which to assign goal expectancy to shots is to apply it to the end of player and/or team evaluation. Let xG define Expected Goals, the sum of goal fractions expected from observed unblocked shots. ixG will denote the xG value of unblocked shots taken by a player, while xGF and xGA will represent the xG value of on-ice shots For and Against respectively. xGF% is analogous to GF%, where goals have been substituted with xG. We can easily observe how the inclusion of a shot quality element yields a measure closer to true goal share.

For comparison’s sake, I’ve included Scoring Chance numbers from WAR On Ice and EGF11Abe’s own expected goals model is explained in detail here. from Nick Abe‘s XtraHockeyStats. While this offers some reassurance that we’re measuring something with our shot quality approximation, it’s really of no use to anybody. After all, we don’t need an indicator of goals when goals themselves are available data. What is of particular interest, to me at least, is whether we can inform better predictions of future goals.

This idea of projecting future outcomes is of great importance in analyses relating to hockey and indeed a great number of fields. In its present condition, 5v5 xGF% is not a better predictor of future 5v5 GF% than CF% at the player level. Regular skaters’ 5v5 xGF% in one >400 TOI season did not yield a higher correlation with the next season’s 5v5 GF% than the same test performed with CF%.12R^2 = 0.103 for CF% compared to 0.081 for xGF%.  The same variance observed in early shot quality analyses prevents on-ice xG from predicting real goals, or itself for that matter, in any practical way. Though descriptive of shot quality, the xG model has not yet shown to be appreciably predictive of future shot quality or goals at the on-ice level.13It’s important to note I’m referring to my own xG model. DTMAboutHeart has shown that his own model does have predictive value.

Why Should I Care?

I believe this is an important question because unless I can provide a satisfactory answer, I’ve wasted your valuable time. I think there’s ample evidence the model does a decent to good job of assessing shot quality given the information available for public consumption. There’s descriptive value here that does not deserve to be ignored, in addition to proven applications at the individual level. Potential uses in team and goaltender evaluation have not yet been discussed. Limitations of the current model have been identified and may point to improvements in successive iterations. One such limitation is the diminished sample resulting from unavailable coordinates for blocked shots. Variance is another issue that can potentially be addressed through regression. It is worth consideration that failure to find reproducibility in on-ice shot quality is not in and of itself a failure. Though disappointing, it is in fact in line with findings such as Tulsky’s discussed above that have long held up to scrutiny. It may serve as consolation, however, to develop practical uses of such a model beyond individual goal scoring.

In the next instalment, I will propose improvements to the model and discuss practical applications of xG in analysis.

7 thoughts on “Shot Quality and Expected Goals: Part I”